The Jewel of the Grade is a silver Triangle. Center inside the inner edges of the triangle is a silver “N.” The Jewel is suspended from a ribbon containing the colors of the Rainbow. 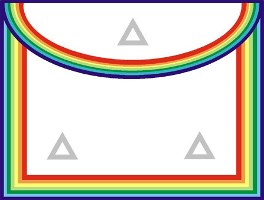 The Apron of the Grade is white, bordered with a rainbow colored edge, and having three triangle of silver, two at the lower corners of the apron, and one centered on the flap. Some councils still use the apron prescribed in early rituals, which is of a ram’s fleece, wool side worn out.

The Sash of the Grade is approximately four inches in width, light green; or rainbow colored, and worn from the right shoulder and resting on the left hip.

Information on the degrees was found on the Grand Council Allied Masonic Degrees website amdusa.org